Thursday turned out to be quite a blustery April day, and after spending a few hours photographing kids and trying to deal with hair blowing side to side and straight up, I came home to a sunny, comfortable day. I began working on the images I had taken. A very small bird captured my attention through a window, walking across the top of a decorative brick wall behind the house. I grabbed my camera and walked outside.

The young bird had already walked the length of the wall when I got outside, and I took this image of it perched in a nearby tree. I had a wide angle lens, so the quality isn’t the best. 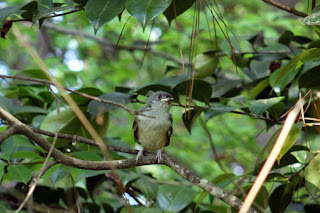 but my wife pointed to another baby on the ground, a foot away from the wall. After a couple of tries I finally spotted the youngster, and I slowly walked over, lay on my belly, and took a handful of images, including the one I have posted. The bird was looking from side to side, wondering how its life had been thrown into such upheaval, when it finally got excited enough by my presence and it fluttered with all its might, went straight up six inches, and landed on my camera lens, inches from my face. 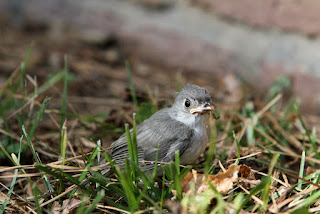 I’m not sure who was more startled, me or the bird, but it increased the flight time, going about fifteen feet in distance, and two feet off the ground. We contemplated putting the young bird on top of the brick wall before the neighborhood cat got wind of the new opportunity, but the bird walked under a shrub, and the mama bird began diving across our path, making her presence known. We decided to let nature run its course.

Later, as we stood in the kitchen, I looked outside at the brick wall, further down from where we had originally seen the bird, and the baby was struggling the get up the wall. It flapped its wings and went up a few inches, then held on to the wall for dear life, and go up a little more. Mama was flying by giving encouragement, but her baby had to do it on its own to survive. The young bird reached the top of the wall after quite a struggle, and immediately mama flew in for encouragement. She got beak to beak for a few seconds before flying off again.

The last I saw of the struggle, for the day, was the baby flying along the top of the wall, then taking a right hand turn, before going down. Mom and Dad flew straight down to try and help.

All I can imagine is the nest fell during the wind gusts that were hitting around 20mph. The babies were close to being ready to take on the world. Or perhaps they left the nest, and unlike their siblings, these two may have been behind the others in development.

This struggle goes on daily, and in the wild it’s survival of the fittest. I still have a difficult time watching such a helpless baby die, thinking it just needs a little nurturing and it will grow strong like its parents. Like a human born prematurely, needing special care for a time.

Hopefully this one had a happy ending.
Posted by Craig Elliott at 4:36 PM