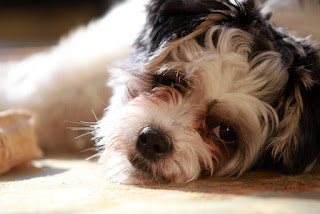 Several months back we decided to get a small dog for the kids to enjoy, while they're still at home. All are driving now, and my son is in college. Life marches on relentlessly; like any parent that has kids this age, I remember carrying them in my arms like it was yesterday.

Allergies are a problem in our household, with four of five people allergic to cats, so we decided to find a dog that doesn't shed much. Something small that can stay indoors. Our youngest daughter did the research, and after a few visits to animal rescue groups and to the pound, she picked out a one year old pup from the pound, with matted hair so thick his eyes weren't visible. She picked out the least attractive one there, but she saw something beyond the unkempt exterior. Sebastian came home with her, and he was immediately cleaned up and groomed.

Our back yard is closed in by a wood fence on one side and a decorative brick wall that curves around the remainder. Several wood scraps and cinder blocks later, I closed off all of the openings that he quickly discovered allowed him to escape into the great city beyond the walls. Quickly, he let us know he likes to roam and explore.

Anticipation preludes his daily ventures into the back. When the screen door is open he goes out with several hops, like a rabbit, and begins his routine inspection of his secret place, however ordinary it can be to him. He takes great delight in mundane things that we often take for granted. Turning his head with blinding speed, he sits at attention at every chirp and remark of birds, squirrels, and the occasional neighbor. Nothing is standard operating procedure, at least not after the first ten seconds or so. He enjoys the day, whether overcast, sunny, cold, warm, or somewhere in between. Sebastian finds some comfort in the delights that are in front of him, and I doubt he worries too much about what isn't there.

I think of the classic book by  Frances Hodgson Burnett titled The Secret Garden.

I try to enjoy each day, but it's tough to match his youthful enthusiasm. After he gets older and calms down  bit he'll probably be more like us. Ahh, another day, let's get through it, the weekend is on its way. Vacation is only another month. Looks like I'll have to start mowing the lawn soon, the temps are turning around. Sun's out? So what, it will be here tomorrow. Or the day after that.

In the meantime we try to enjoy his youthful exuberance, all while we can't help but get annoyed at times. But he will learn, just give him time.
Posted by Craig Elliott at 11:11 AM