I had thought about skipping the eclipse viewing, all things considered. The talk of snarled traffic and the uncertainty of weather in the higher elevations where I wanted to view the event made it an easy one to excuse away. It turned out to be worth every step.

I shared the hike with my daughter Marissa and her boyfriend Michael. We hiked to a spot in the Smokies that fits the grandeur of the solar eclipse on 8/21/2017. Traffic was gridlocked at 7am trying to get into Cades Cove and we couldn’t reach the Lead Cove trailhead. We parked in a pull off, hiked back down 0.4 miles to the Bote Mountain trail, and started up towards Spence Field.
A hiker stood at the trailhead, safely off the roadway behind a boulder, staring at her trail map. She was trying to get into Cades Cove and didn’t want to walk another five or so miles along the road. I showed her the trails that would put her in the Cades Cove picnic area and she headed on up.
The hike was uphill and grueling at times. The trail is wide, but rocky. As we passed the trail intersections of Lead Cove and Anthony Creek we were joined by additional hikers. A middle aged guy was trying to catch his breath and told me he didn’t want to end up having to ride in one of those carts when he goes to Walmart, so here he was, struggling up the hill. Michael and Marissa stayed ahead of me, which I told them to do. My trail name should be Molasses because as the old saying goes, I am slower than molasses. And clumsy if I get in a hurry.
A side note- up into the sixties Bote Mountain Trail was a road that carried drivers close to the Appalachian Trail.
I met an interesting guy on the way up, after passing Lead Cove. He said I must be a botanist. He noticed my interest in the flora and anything else that captured my fancy, which is part of the reason I’m so slow. He told me he is slow too because he stops to look at plants. He is much younger and in better shape but doesn’t want to miss anything. His upbringing is such that he has both knowledge and interest in natural remedies. He gives friends and family plants he harvests for making into teas and remedies (he doesn’t harvest in the Smokies.) We exchanged numbers, and I’m looking forward to hiking with him, maybe in October.
We reached the Appalachian Trail after one final steep switchback and took a left to Spence Field.
The views are magnificent, and I want to head back up soon when it isn’t as crowded. Between Spence Field and nearby Rocky Top there were around 120 people. We had some interesting characters, including a ukulele player and a guy that was asleep under a lean-to, snoring loud enough to be heard by anyone within thirty feet. Hikers that make this trek are a different breed, although this event brought out some that don’t do this type of hike. 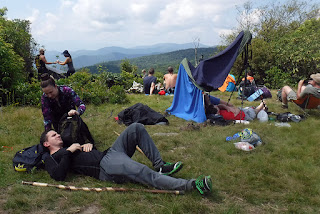 The plant guy walked by us and headed on up another 1.2 miles and 500 feet of elevation to Rocky Top, and he handed me a dried fig as he passed by. A good snack after the climb.

The event was quite a show. We were not in the center line of totality but with the center line passing through the southeast corner of the park we were close. Totality lasted about 2 minutes from what I heard, although I didn’t time it. During totality the temperature dropped, locusts sang their night songs, and the stars came out. The bright star may have been Saturn, from what I had read.
With the view we had from the mountaintop we saw classic pre-sunrise colors to the west, with hues of purple and blue. Purple mountain majesties. Turning around and looking to the east I saw the sky with its narrow band of color that rimmed the horizon like a sunset disappearing into the evening’s darkness     .
And then someone turned the light on.
The first bit of light that peeked through reminded me of a single light bulb overhead in an interrogation room, with cops trying to pull a confession out of someone. A narrow, dim light that quickly grew into daylight again, but not the intensity you expect at 1:30 in the afternoon. A softness of light soaked the mountaintop, and it slowly began its journey back into harshness of light and the humidity that comes with a sunny August afternoon.
Light on either side of totality was gentle. Marissa said it made her want to remove her sunglasses the way you would in later afternoon. Crescent shaped shadows were anywhere light filtered through. In darker sections of the path bright lights in crescent shapes dotted the otherwise shadowed ground. 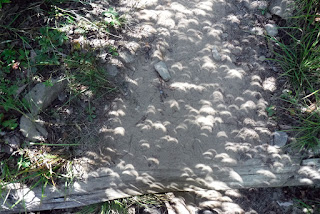 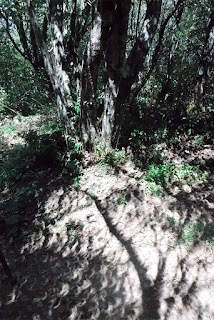 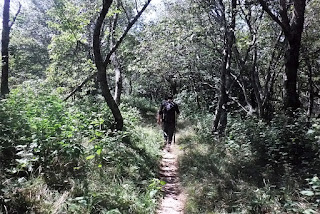 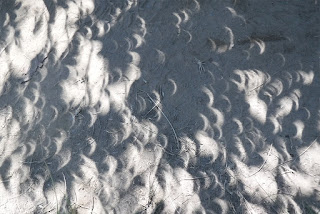 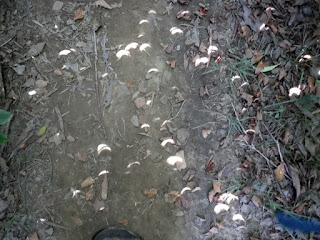 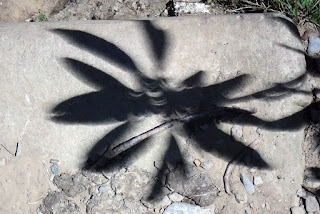 The detour we made up Bote Mountain added distance to our hike, and my total was 14.7 miles, plus another 0.8 to and from the trailhead to my car. Michael and Marissa added another 0.6 going to the Spence Field shelter and the water source. 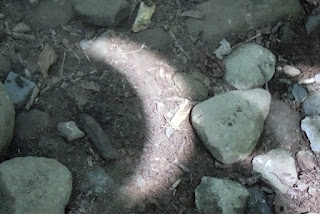 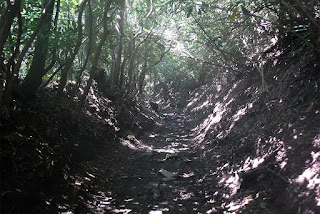 As we were nearing the end of our hike I caught up with them, only because they stopped and waited on me. Marissa told me about a couple from Philadelphia that had missed their trailhead coming down and would have to walk back up the road a few miles. They had driven all night to get there, hiked up to Spence Field, and were planning to drive home that night, alternating drivers so they could both rest. We caught up with them and I sent them to an alternate trail that went straight to their car same trail as the lady that morning. He took a picture of my map showing the trail intersection.
Last year I was hiking the Curry Mountain trail and I struck a conversation with a gentle man at the intersection where I planned to turn around. After a while he asked if I had a trail map with me and I admitted I did not. He gave me a National Geographic map and said he has given away dozens. I thanked him, and I always have one with me now. It’s too easy to get turned around when you’re tired. I hope I run into him again on the trails so I can let him know how much his map has helped others.

The next solar eclipse here is only seven years out and stateside it goes from Dallas up through Cleveland. I’m thinking it will be worth a road trip.
Posted by Craig Elliott at 7:21 PM